About 300,000 years ago, molten lava flowed into the cool waters of the Pacific, creating a violent steam explosion. Cinder, ash and chunks of limestone reef flew into the air, then settled and hardened into a tuff cone that measures 760 feet at its highest point and has a 350-acre crater within it.

Legend says this volcanic cone was one of the places where Pele, the volcano goddess, and her younger sister, Hiiaka, lived as they searched the Hawaiian archipelago for a permanent home. It is said Hiiaka dubbed it Lae-ahi, thinking its forehead resembled the lae (brow) of the ahi (tuna). The spelling was later changed to Leahi.

Scholars of Hawaiian history and culture note another translation of Leahi could be lei (wreath) and ahi (fire), referring to the fires Hawaiians lit along the crater’s rim to guide canoes. A heiau (temple) dedicated to Laamaomao, god of the wind, was built there to deter trades that could extinguish those navigational fires.

How Diamond Head Got Its Name

Western explorers and traders hiking Leahi’s slopes in the late 1700s mistakenly thought calcite crystals sparkling in the rocks were diamonds. Thus came about the common name for what is now Oahu’s most famous landmark: Diamond Head.

In 1904, the federal government bought Diamond Head for military use. Fort Ruger, Oahu’s easternmost defense for sea- and ground-based attacks, was established there in 1906, and in the ensuing years bunkers, pillboxes, batteries, anti-aircraft gun positions, searchlight stations and a fire control station were installed in and around the crater. None of the artillery was fired during a war, however, and all guns were removed between 1940 and 1950.

Diamond Head was designated a State Monument in 1962 and a National Natural Landmark in 1968. Built in 1908 as part of the Army’s coastal defense system, an 8/10-mile trail climbs 560 feet from the crater’s floor to its summit. Hiking the trail is a popular activity because of the reward at the top: a magnificent view of the ocean and coast stretching from Koko Head in the east to Waianae in the west. Nominal entrance fees are charged to visitors.

1. Use To Be a Military Base

The first military reservation on the islands of Hawaii was called Fort Ruger and was built inside the crater of Diamond Head. It was purchased for $3,300 in 1905 by the US Government. The government considered Diamond Head the perfect place for a military presence because the elevation and steep mountain walls acted as the perfect spot to fire in a 360 degree radius at incoming ships in the nearby waters. Diamond Head Crater is now a state park and no longer used as a military facility.

About 300,000 years ago, there were small volcanic eruptions on the island of Oahu creating 3 significant craters in the area: Punchbowl, Diamond Head, and Koko Head. To the Southeast of Diamond Head is an area called Blackpoint, created by the lava flow from the eruptions. It’s interesting to note that the eruptions in some places covered coral reefs that now are over 100 feet above sea level, meaning the sea level was at least that much higher than it is now. It was an active volcano at one time, over 150,000 years ago, but has been dormant since and there’s no lava in the crater.

3. How Diamond Head Got Its Name

The name of Diamond Head became famous in the 1820’s when crews from British ships discovered calcite crystals on the crater. Because they believed they were diamonds, they named the famous volcano what it’s currently known as. Later, the British found that the crystals were, in fact, not diamonds.

To the locals in Hawaii, Diamond Head Crater is actually called Le’Ahi. Le’Ahi means “brow of the tuna fish”. Hawaiians believe the legend that Pele’s sister, Hi’iaka gave it the name because from a distance, the crater looks like the back and fin of a tuna fish. 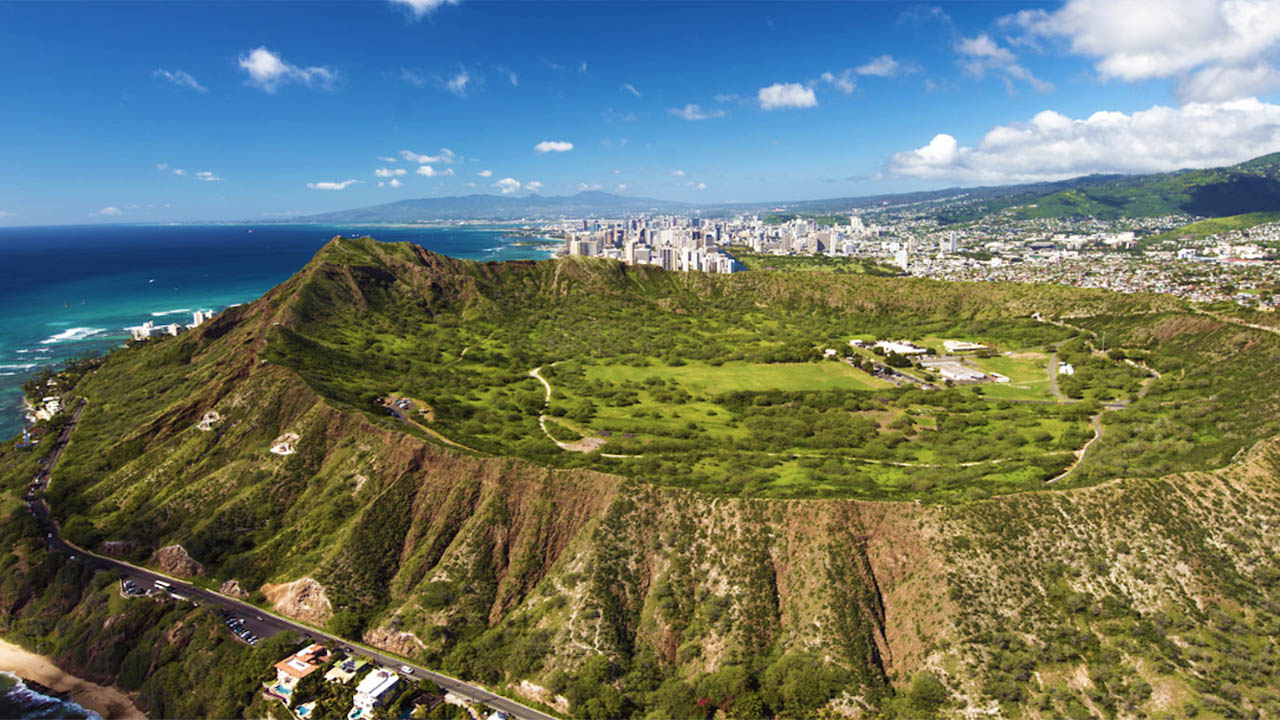 Diamond Head Mountain only stands about 760 feet above sea level. If measured from the crater floor, the height of Diamond Head Mountain is 560 feet. Many who visit Diamond Head Crater make the moderate hike and using the well-maintained hiking trail all the way to its summit. Once you crest the summit, you’ll get a spectacular vista of the leeward side of the island of Oahu, including Waikiki, Honolulu, and another famous landmark, Diamond Head Lighthouse. The view of the Pacific Ocean is breathtaking and on clear days, you can see the nearby island of Molokai.

It’ll take about an hour to reach the summit, but only about half the time to return back down. The trail climbs the inside slope of Diamond Head for about 0.6 miles. It’s a switchback trail with the mountain on one side and a railing on the other.

After a lookout point that doubles as a rest stop, the trail takes a steep upward ascent through a series of stairs and tunnels. If you want to reach the second lookout point, you’ll have to climb 99 steps that eventually leads to a World War II bunker. From there, 54 steps will lead you to the final lookout point.

After you climb the 54 steps, you will reach the summit of the Diamond Head Crater, giving you some of the finest panoramic views on Oahu. Take a short walk around and savor the moment. On a clear day, you see forever. Standing atop the lookout, viewing Oahu’s entire leeward side, feeling the trade winds and hearing waves crashing far below, one can’t help but feel humbled to be on this beautiful island.

If you’re planning to come to Hawaii anytime soon, we couldn’t recommend going to this beautiful crater enough. You’ll enjoy the scenery and your mind will travel back in time, imagining what this amazing volcano once looked like before it erupted.