The Hawaiian Islands are a true melting pot: with no true ethnic majority, you will find countless different cultures on display throughout the islands, including Japanese. Nestled at the base of the striking Ko’olau Mountains on Oahu’s Windward Coast is a breathtaking Buddhist temple that will quickly transport you to Japan. This is the Byodo-In Temple in Hawaii, and it is an absolute must-visit for anyone living — or vacationing — in Hawaii.

Located within the Valley of the Temples Memorial Park in Kaneohe, the Byodo-In Temple is a half-size-scale replica of a famous temple in Kyoto, Japan that is more than 950 years old AND a United Nations World Heritage Site. The Hawaii replica, however, is less than 100 years old. The shrine was dedicated in 1968 to commemorate the 100-year anniversary of the first Japanese immigrants in Hawaii. 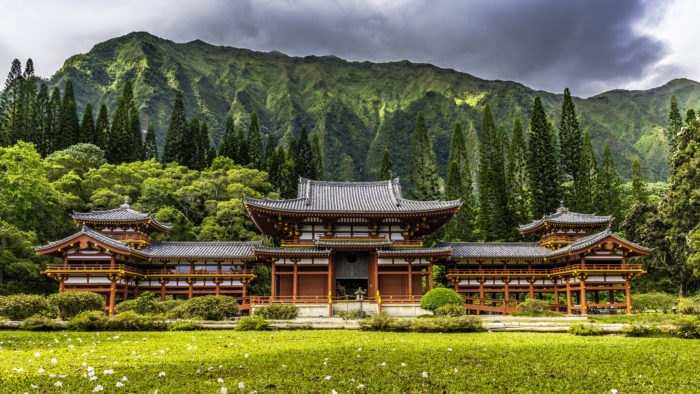 After you pay the $5 entrance fee and cross the stunning wooden bridge leading to the temple, you will be transported quickly to either Japan or perhaps a land you’ve only ever dreamed of. 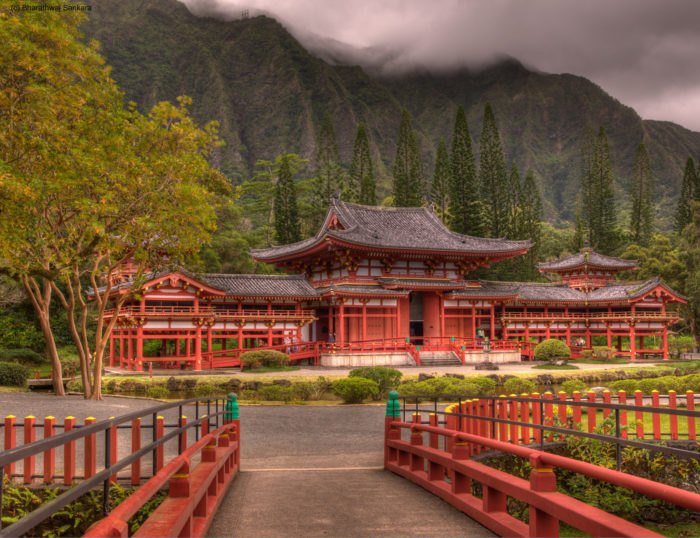 To your left, before you enter the temple, you will a three-ton brass peace bell you can ring for yourself. 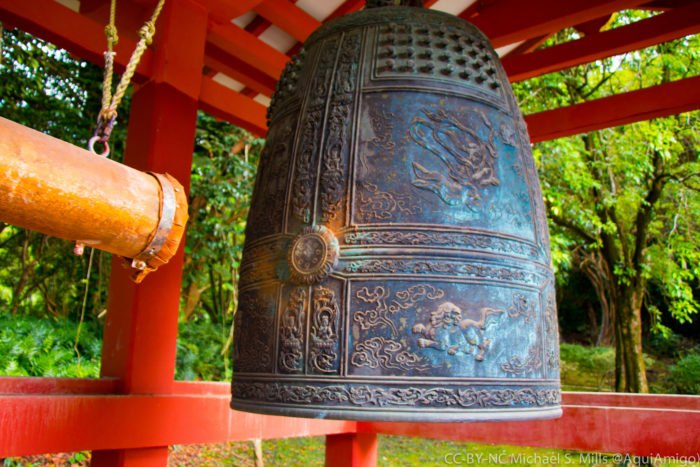 Enter the temple and be amazed by the incredible architecture and handcrafted statues. Just don’t forget to take your shoes off at the door. 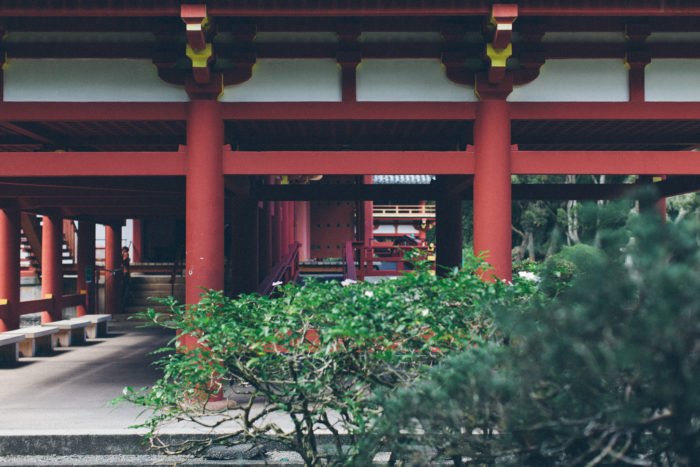 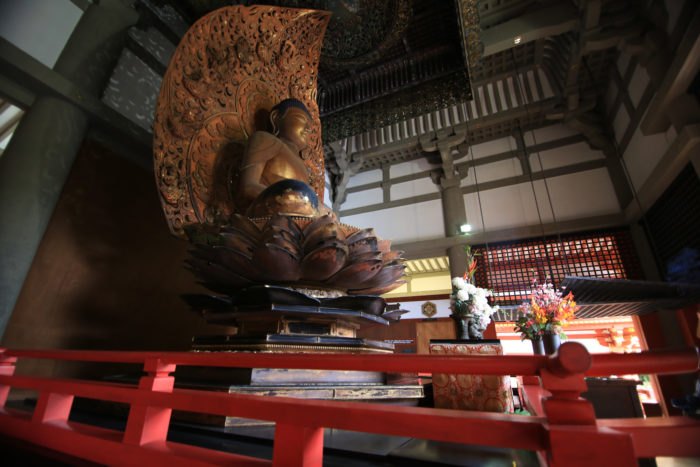 Pictured above is an 18-foot statue of the Lotus Buddha.

As you slowly meander through the grounds, you will find stunning statues, a large reflecting pond, meditation areas, and small waterfalls throughout the lush and beautifully-landscaped grounds. 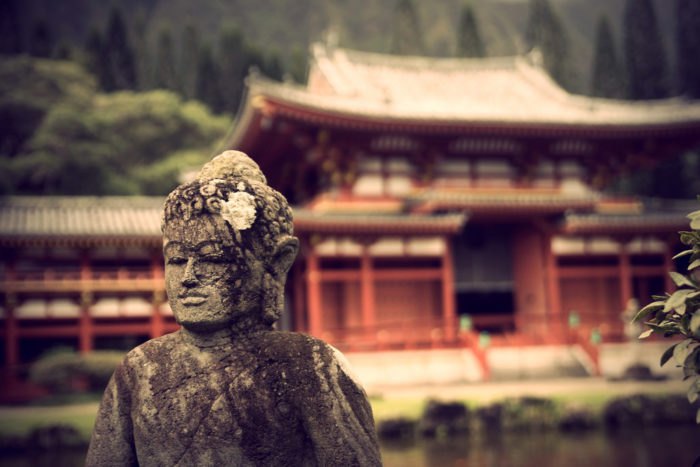 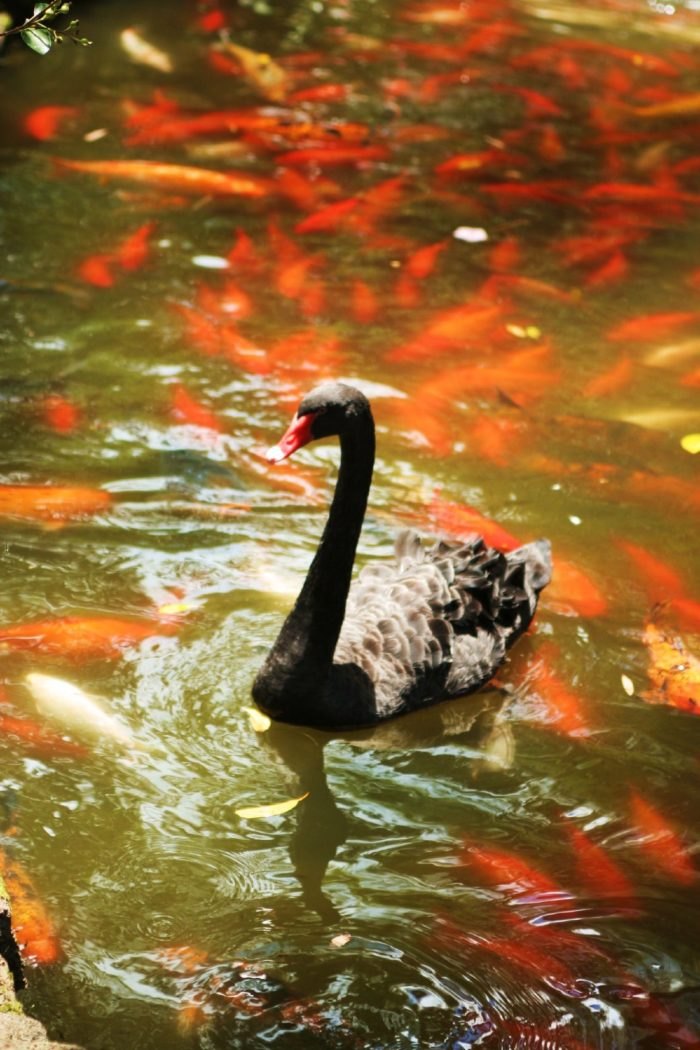 The striking temple couldn’t be located in a more picturesque setting, and you won’t find a better spot to reflect, relax, and take in Hawaii’s natural beauty and history anywhere else on the island. 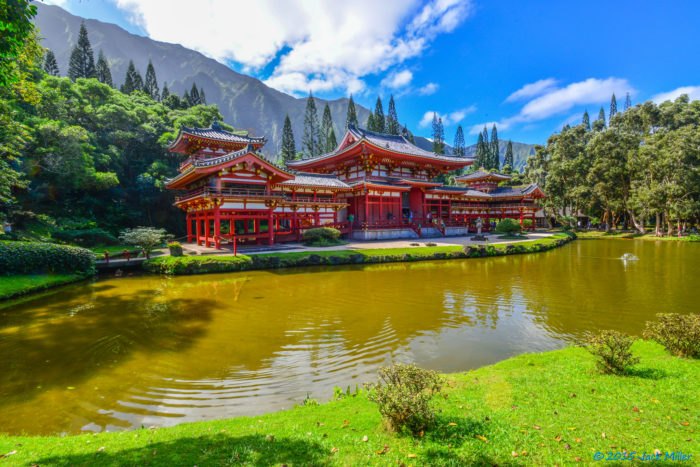 Sit on a bench and listen to the sounds of birds chirping, the wind rustling through the trees, and water flowing through the streams. Watch the koi fish dance as visitors feed them, and admire the beauty of the majestic temple in front of you. You might also smell lavender wafting through the air, or perhaps incense being burned in the nearby gift shop full of goodies to take home. 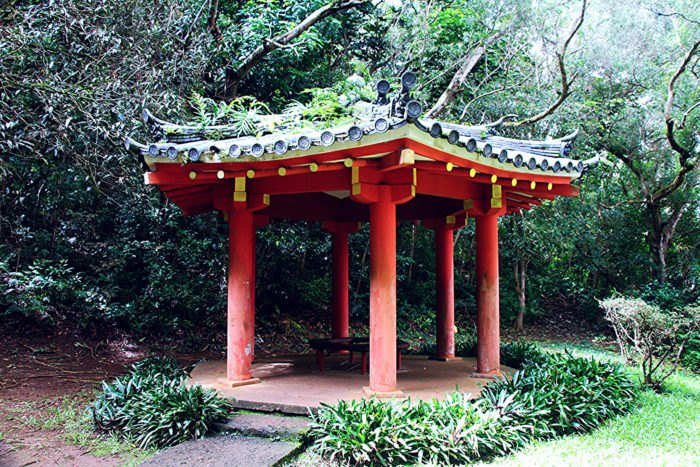 It’s impossible not to feel at peace here. 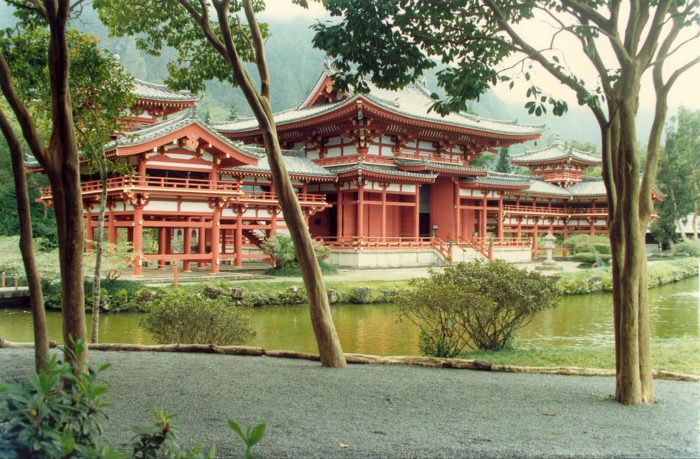 Please note that, though it is not a practicing Buddhist temple, it is still important to be respectful and quiet at all times. 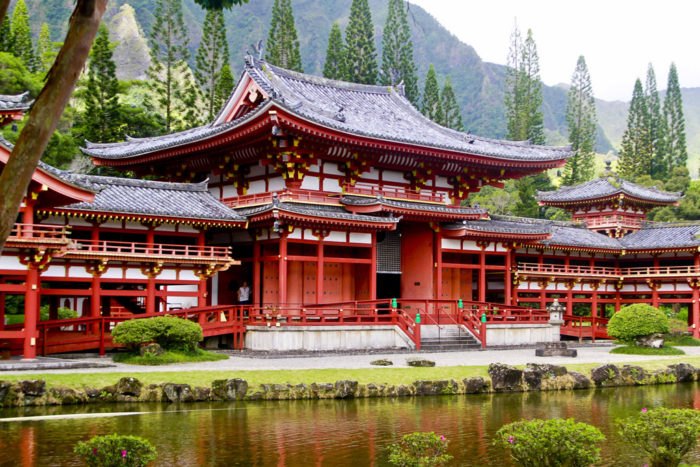 Byodo-In Temple is one of many Japanese Buddhist temples in Hawaii.

But because of its connection with the UNESCO World Heritage Site of the same name in Japan, it’s probably the most well-known temple in Hawaii.

Yet it’s still considered something of a lesser-known secret on the island of Oahu.

Like many others, when we were planning our trip to Hawaii, we pictured pristine sandy beaches, tropical forests, friendly natives and exotic wildlife.

Basically, we were expecting an island paradise.

Although Hawaii has all of this and more, the Buddhist temple we discovered in Kaneohe (roughly 30 minutes away from Honolulu) was something completely unexpected!

If you follow in our footsteps and stray away from the glitz and glamour of Honolulu and Waikiki Beach, you’ll be rewarded with beauty, tranquillity and kindness in the shape of this picturesque temple.

Here’s what you need to know about visiting Byodo-In Temple aka Hawaii’s stunning Buddhist temple.

A Brief History of Byodo-In Temple in Hawaii

Built in 1968 to commemorate 100 years since the first Japanese immigrant landed in Hawaii, Byodo-In Temple in Hawaii is a replica, (albeit smaller in size), of the 1000-year-old Buddhist temple of the same name at Uji in the Kyoto Prefecture of Japan.

Byodo-In Temple roughly translates as “Temple of Equality – not to discriminate.”

We think this is very fitting because the Hawaiian version of the temple isn’t actively used for spiritual or religious ceremonies, which means people from all walks of life – regardless of faith, spiritual beliefs or anything like that – can visit the temple, its surroundings and even meditate in the temple’s ‘Meditation Pavilion’ if they wish to.

Weddings are the only ceremony you might encounter here as they’re sometimes held in the temple’s grounds. Again, this is very fitting considering this temple was also featured in the popular TV show Lost as the setting for Sun and Jin’s wedding in Korea.

Hawaii’s Byodo-In Temple sits at the foot of the majestic Ko’olau Mountains in the Valley of the Temples, which is also home to a cemetery and memorial park for the thousands of Buddhist, Shinto, Protestant and Catholic residents from Hawaii who are buried here.

Again, this just goes to show the temple’s association with equality and non-discrimination as you don’t have to be of the Buddhist faith to have this extraordinary location as your final resting place. You just have to be a Hawaiian resident (and probably a wealthy one at that!)

If this temple sounds like somewhere you’d want to include on your Hawaii bucket list, (and it should be!), then here are our top tips for visiting this beautiful Buddhist temple in Hawaii.

Hawaii’s Byodo-In Temple is on the island of Oahu, in Kaneohe, which is roughly 30 minutes in the car from Honolulu and the infamous Waikiki Beach.

When you arrive, you’ll walk across an arched bridge and be able to spot the temple straightaway.

Once you’ve crossed the bridge, look to your left and you’ll see a large bell (a bon-sho) partly shrouded by a red gazebo.

It’s customary to ring this bell with the wooden log (a shu-moku) before entering the temple, so you’ll have a long and happy life.

When you do, a loud deep drone will sound, which might seem at odds with the tranquil temple grounds – but it really adds to the atmosphere. You’d be forgiven for thinking you’ve wandered into Japan for the day!

After you’ve rung the three-ton bell, you can take a slow meander across to Byodo-In Temple itself to see a towering 18-foot Buddha statue, which is covered in three layers of gold leaf to make it shine brightly.

Note that you’ll need to take off your shoes before entering the temple (there are signs on the temple’s doors to remind you of this!)

Once you’ve finished admiring the Buddha statue and have popped your shoes back on, walk across to the gift shop and buy some bird and fish feed.

You’ll see some beautiful koi fish in the ponds that surround the temple, which you’re welcome to feed.

You might also notice some tiny brown birds vying for your attention and the food in your hands.

Hold your hand out and the little birds will eat straight from the palm of your hand. Some may even hop onto your hands!

The food from the shop costs just a couple of dollars for a small bag. But you may find a kind stranger offering you their food for free, which is what happened to us.

We were watching and smiling as a young boy fed the fish and birds when a lovely lady offered us the rest of her feed, saying: “I’m just passing on the karma as someone else gave me this food.”

This was such a beautiful moment of kindness (thank you lovely lady!), and naturally, we also passed the bag onto someone else behind us once we were done. Hopefully, something like this happens to you on your visit!

Once you’ve admired the fish and birds, take a slow walk to follow the pond as it curves around the temple’s grounds and you may just spot a tiny turtle or two emerging from the water.