To an average Jane or Joe, alpine cow parades are about male farmers in colorful outfits who try to keep their herds in check as they navigate down the street.

At the most, we may realize that the cows and goats don’t mingle, that women are largely absent, and that the farmers are dressed in various elaborate outfits. But that’s about where our expertise stops. 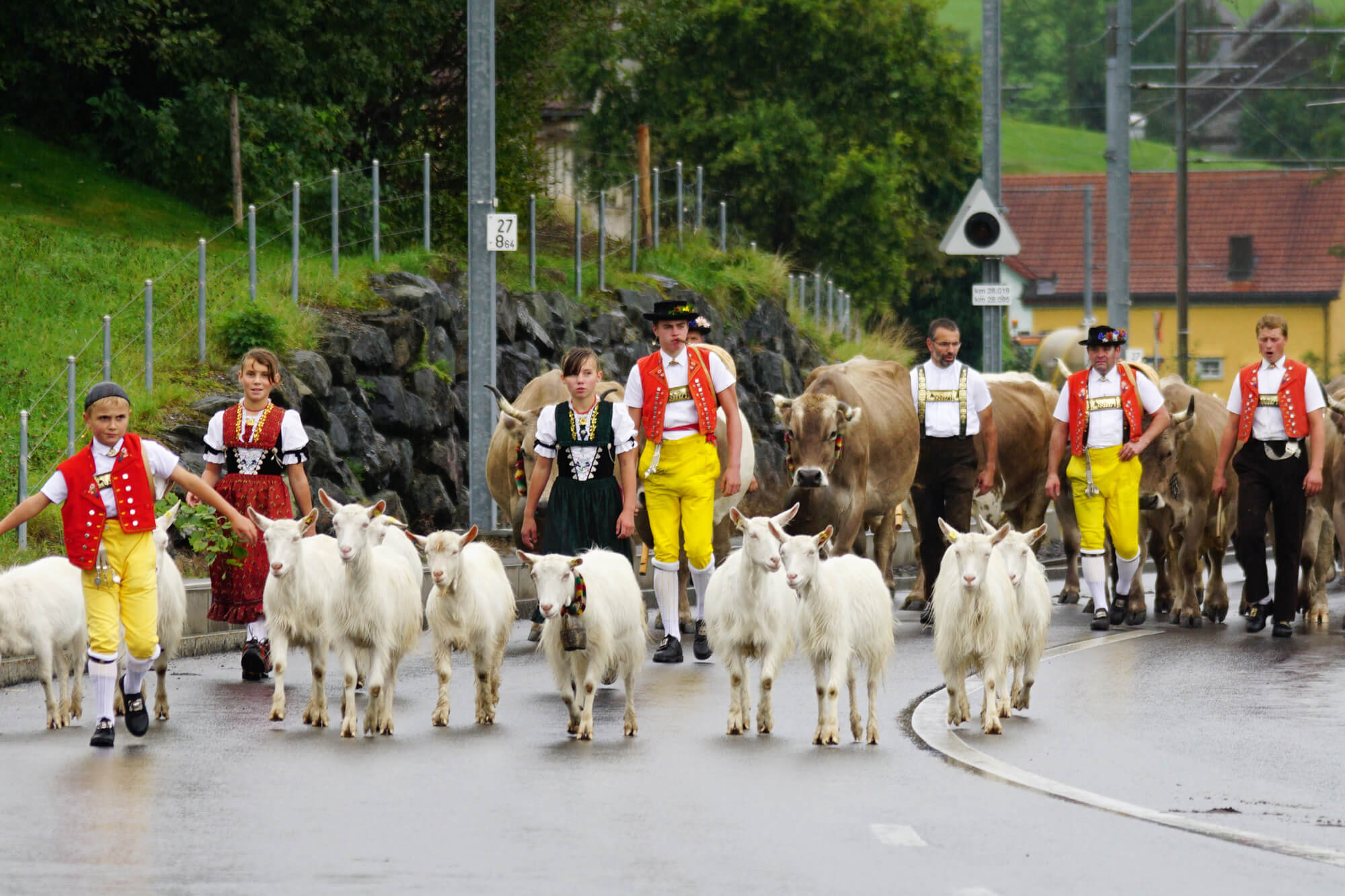 I have recently witnessed several Alpabzug parades in Appenzell where livestock returned from their summer vacation in the mountains. This has sparked my curiosity: what’s behind the living tradition of alpine descents? And how to understand all the intricate details of Heefahre?

Here is my Q&A about the animals, clothing, culture, and rules behind alpine cow parades in Appenzell.

When do alpine cow descents take place in Appenzell?

Generally speaking, alpine cow descents in Appenzell take place from the middle of August to the end of September.

The shorter days of early autumn mean that cows and other farm animals have increasingly less time to roam on alpine meadows. Hence, a lack of food is one of the reasons for driving the livestock from the Appenzell Ausserrhoden alps back down to the valley.

Take the summer of 2021, one of the wettest in recent memory. I overheard two farmers discuss why the cows are already being returned at the beginning of September. Apparently, the summer’s rain caused the grass to rot, creating a food shortage for the livestock.

The chief reason for abandoning higher pastures is the expected onset of winter. At altitudes of 1500 meters above sea level, a September snowfall is not at all unlikely. In fact, some snow never melts even during the summer months.

Each farmer decides on their own date and time to return the livestock to the farm. Some announce their intent to Appenzell Tourism who in turn notify newsletter subscribers ahead of time. Other farmers do their own thing out of the public’s eye.

Where to see alpine livestock parades in Appenzell?

Unlike the alpine ascents during early summer, the returns do not take place in the wee hours of the morning. This means that parades usually arrive near towns as early as 10 AM or as late as 2:30 PM.

You will need to decide whether to view a parade somewhere in the countryside, or within a village. Both have pros and cons: in the countryside, you might have a nicer backdrop for photographs. But you might get stuck for a while as parades pass by – unless you are clever enough to be hiking or bicycling.

We have found the outpost of Triebern in the Schwende District to be a good place for spotting parades in a natural setting.

In towns, you will have as close to a guarantee as there is to see a parade. On the flip side, the setting might include gas stations, intersections, or stopped cars.

Some of the main towns to witness alpine parades are Weissbad, Jakobsbad, Urnäsch, or Appenzell. Many parades end up in Appenzell.

Who are all the protagonists in a typical alpine descent in Appenzell?

Traditionally, there is a particular choreography followed by each alpine procession in Switzerland. It is often a family affair with up to three generations involved. Yet while each region has its own peculiarities, below is the typical parade setup for Appenzell.

At the helm of each alpine parade, you will spot the “goat boy” (Gässbueb): 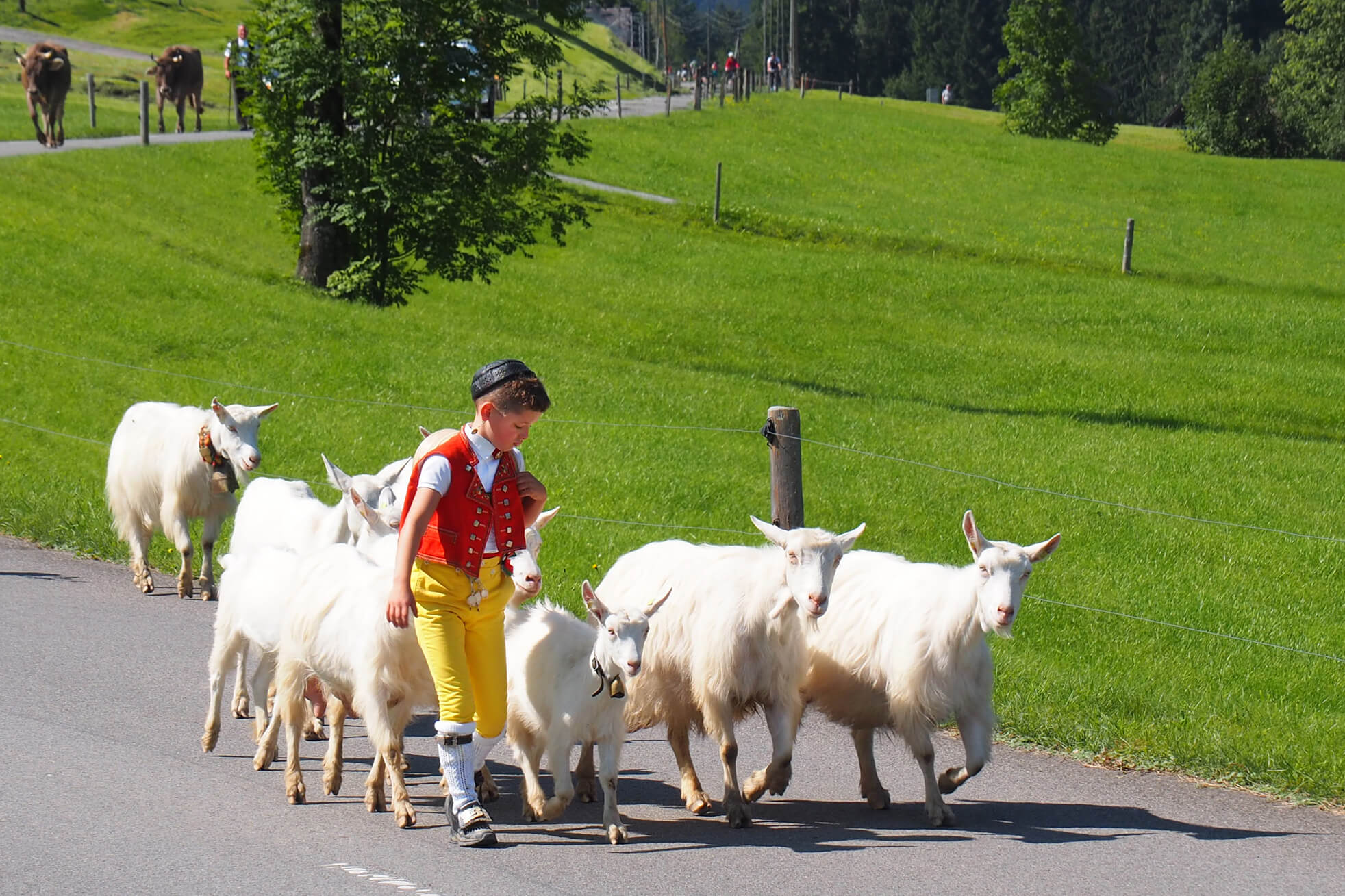 Right behind the leading boy, goat girls (Gässmeitle) would drive a herd of white Appenzeller goats (Gäässe). They are followed by a dairyman (Vorsenn) who leads the rest of the procession: 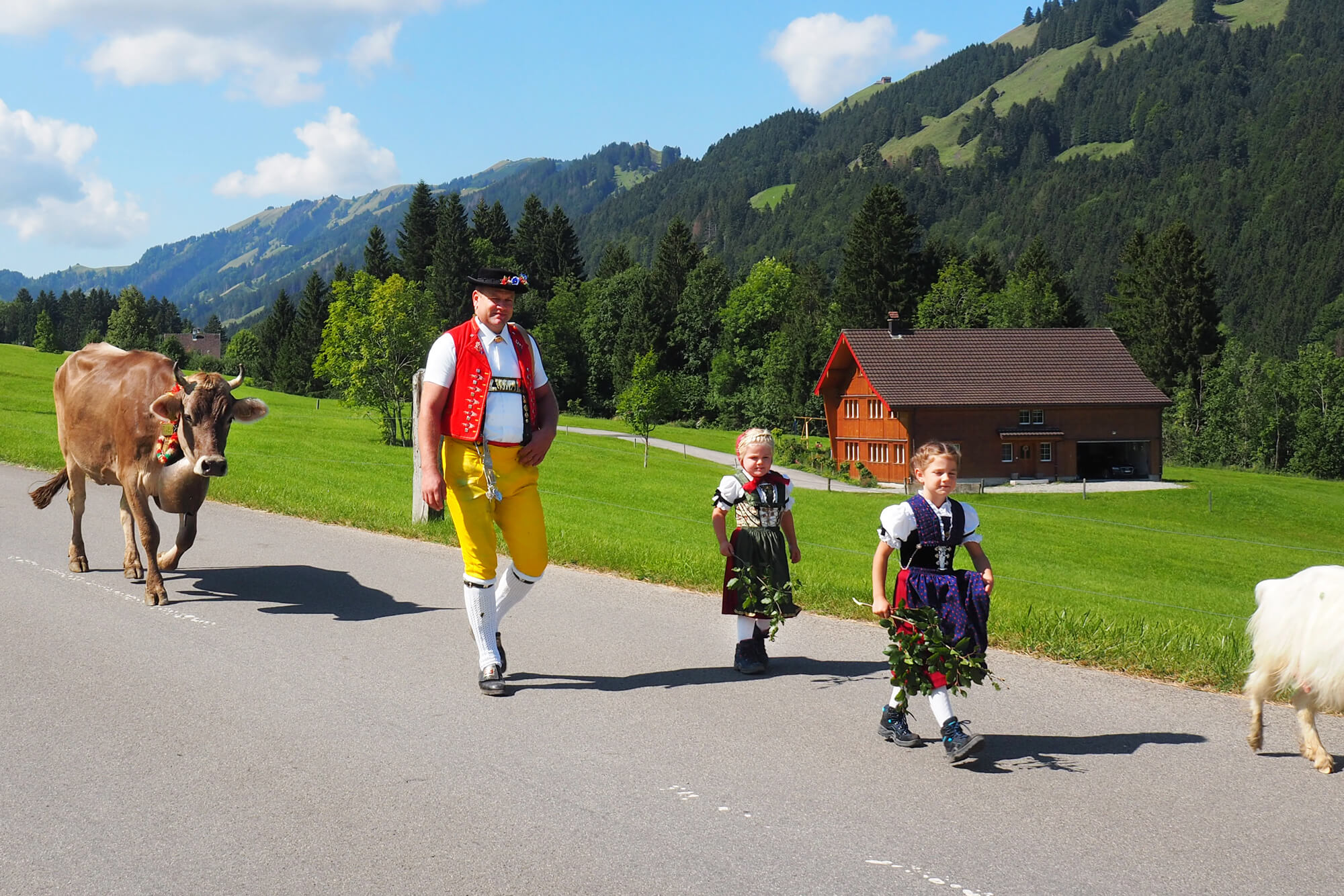 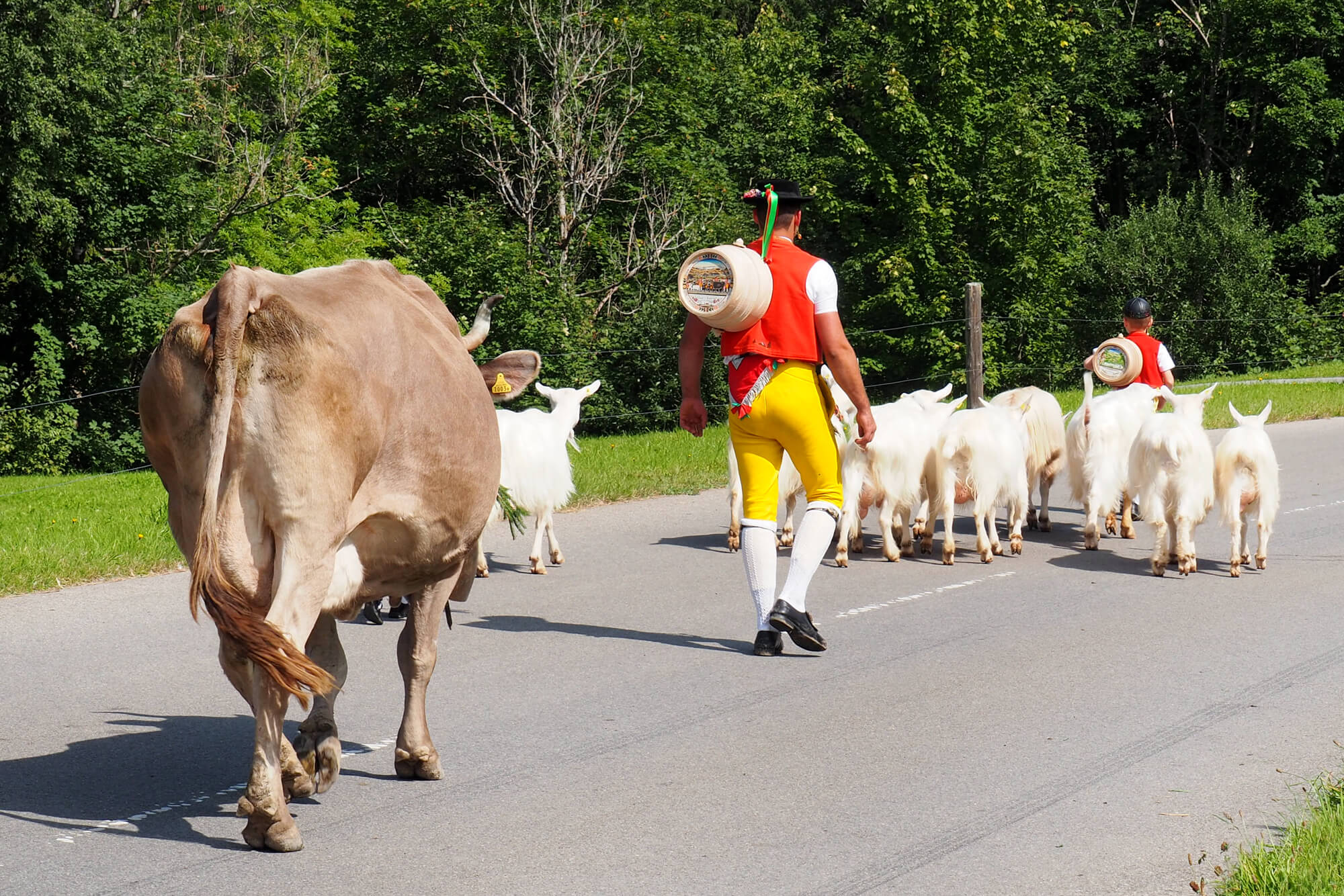 Immediately behind the leading dairyman are the three most beautiful milk cows, each carrying a heavy cowbell (Senntumschelle).

These bells are tuned in order to produce a low-pitched sound profile. In the entire parade, these cows are the most important element: they are honored to carry the largest bells, a prized possession for any farmer in the Appenzell region. 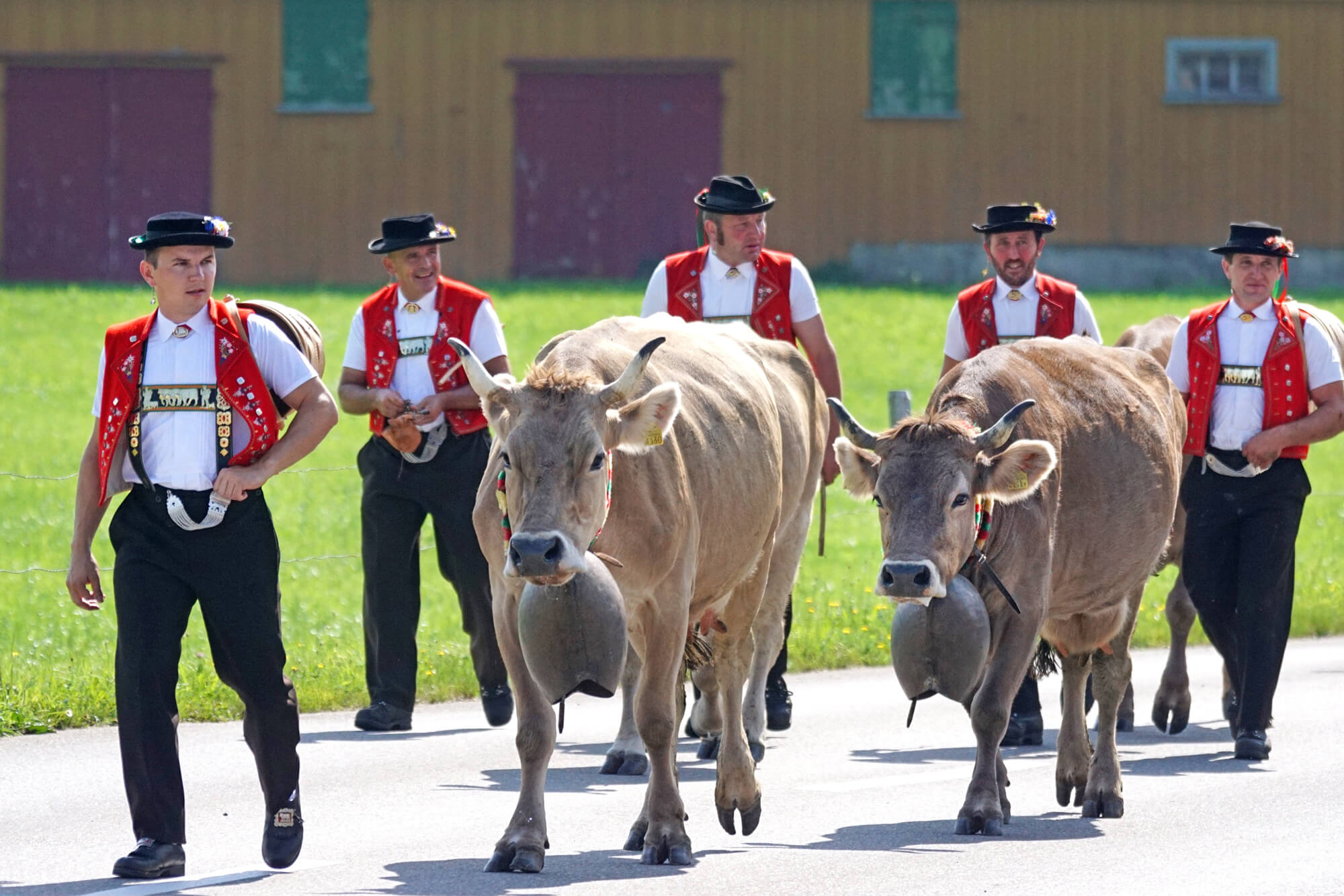 Behind the three leading cows, you will notice a dairyman dressed in traditional fare (Zusenn). He is joined by three alpine herdsmen, and together they are in charge of all the remaining heifers and calves that are trotting along. Pay attention to their small bells, which are often stuffed with hay to prevent them from ringing (Wäädschölle). 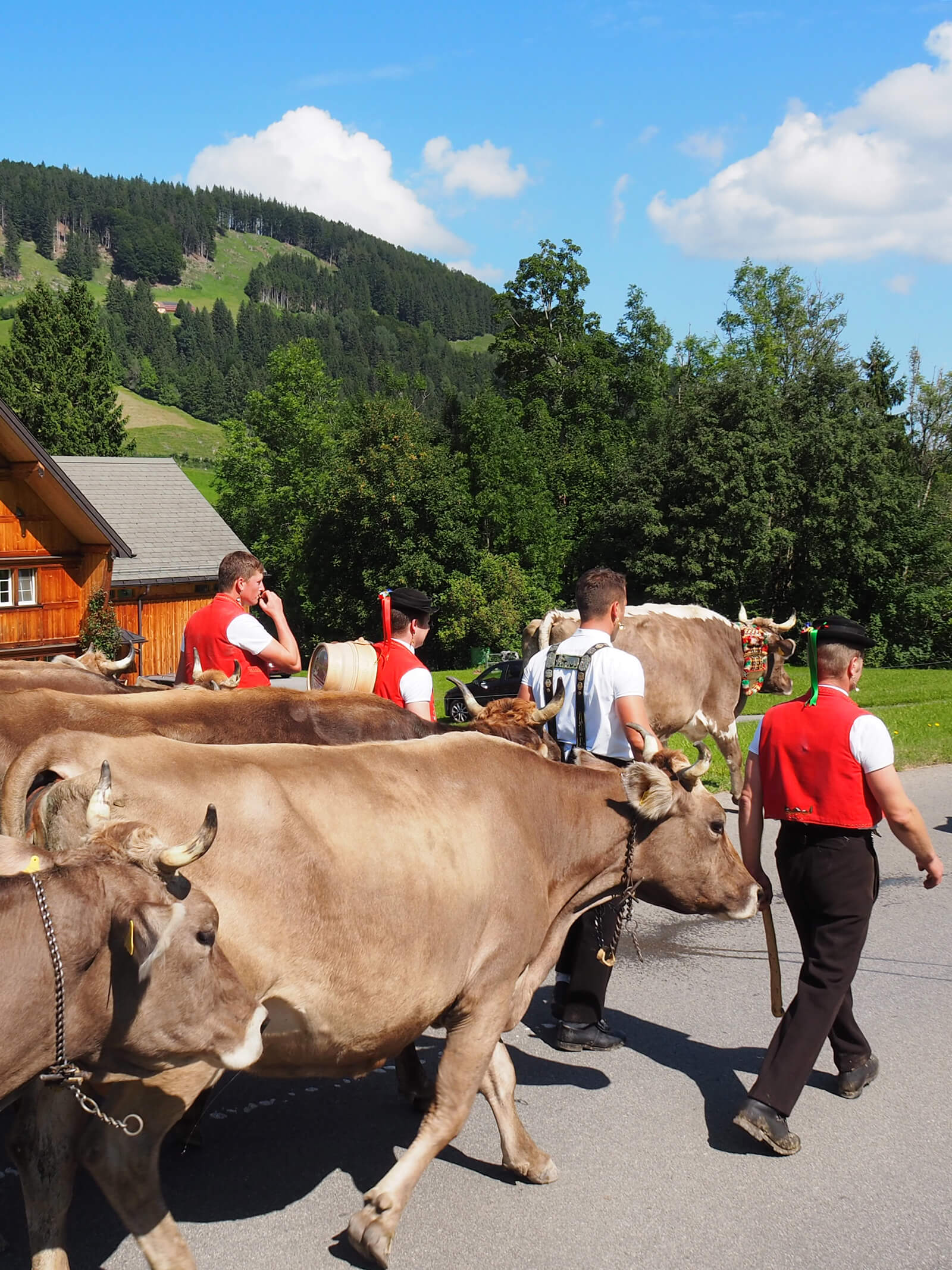 In case there is a steer, one of the helpers might exclusively be handling the large animal. These men might be relatives or other farmers. 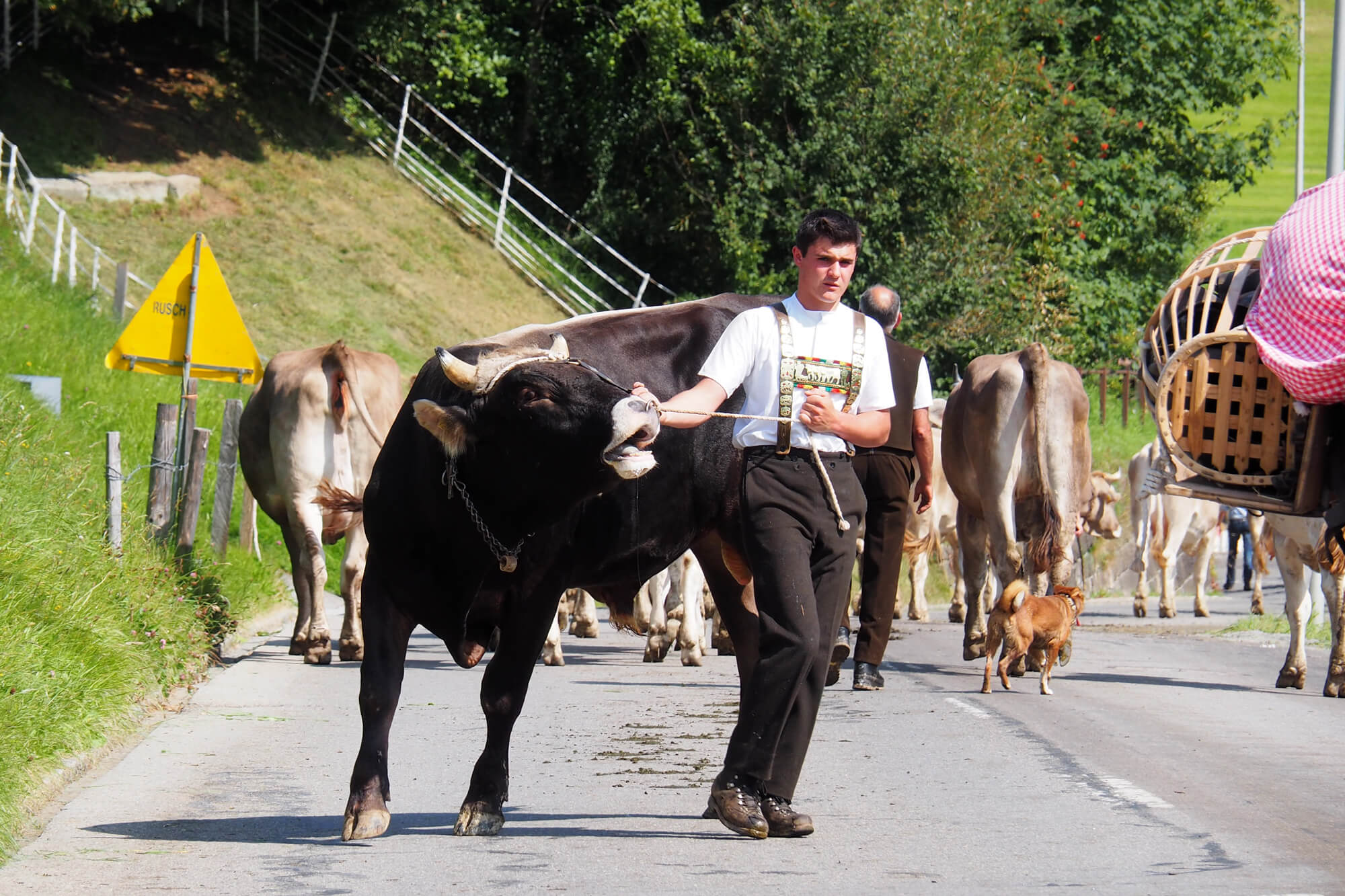 When there is a moment of tranquility, you might hear the four sing a particular “nature’s yodel”. This activity is called zäuerlen.

Larger parades will have one or even several horse-drawn carriages hauling the various tools that were used for cheese production (Ledi or Lediwagen). Also, there might be one or two free-floating boys who help with the herding (Springbuebe). 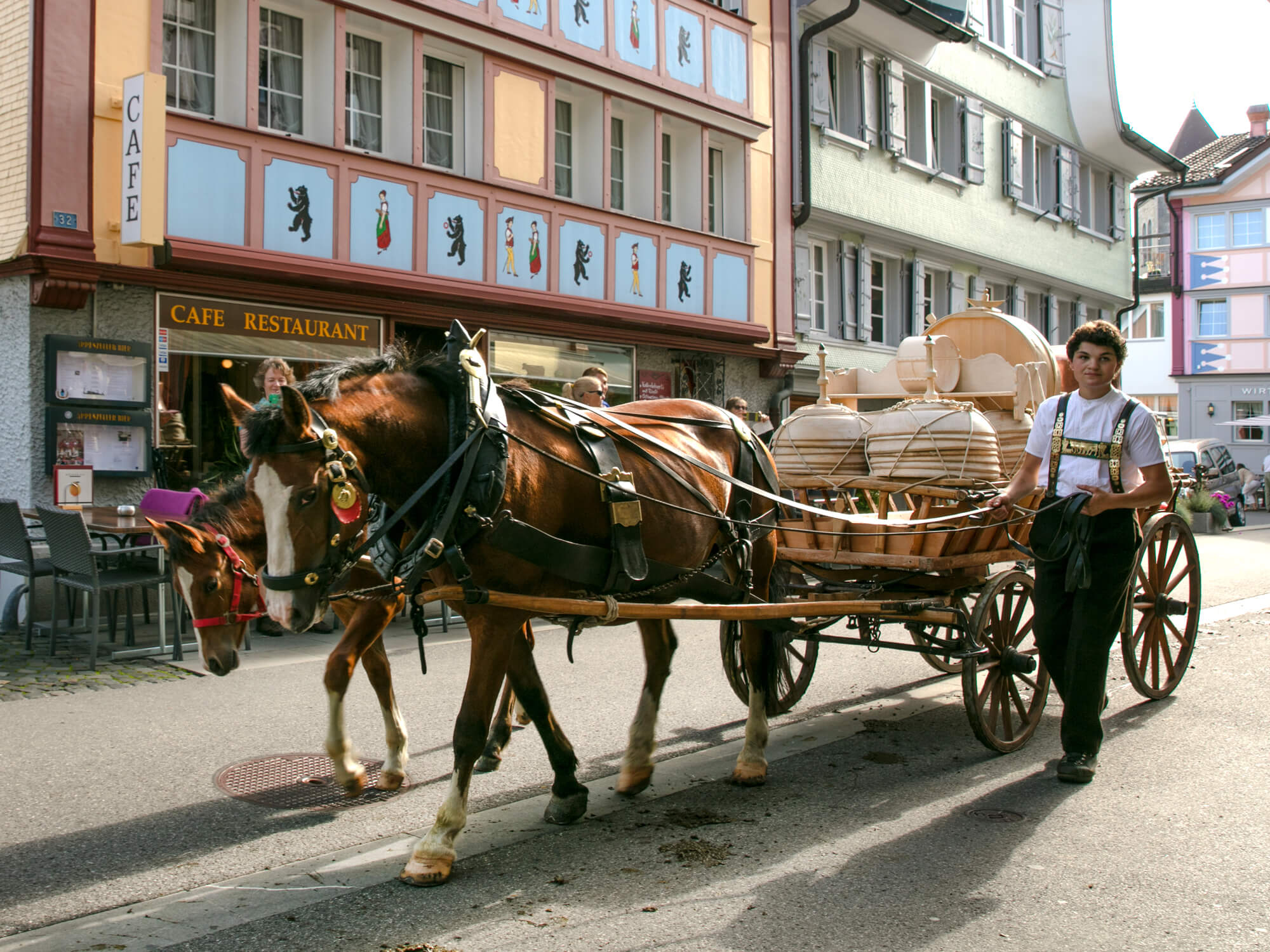 At the tail of the parade, you will traditionally find the owner of the livestock along with an Appenzeller Sennenhund (Bläss). The dog’s attention is entirely on the livestock, herding the bovines that try to go astray. 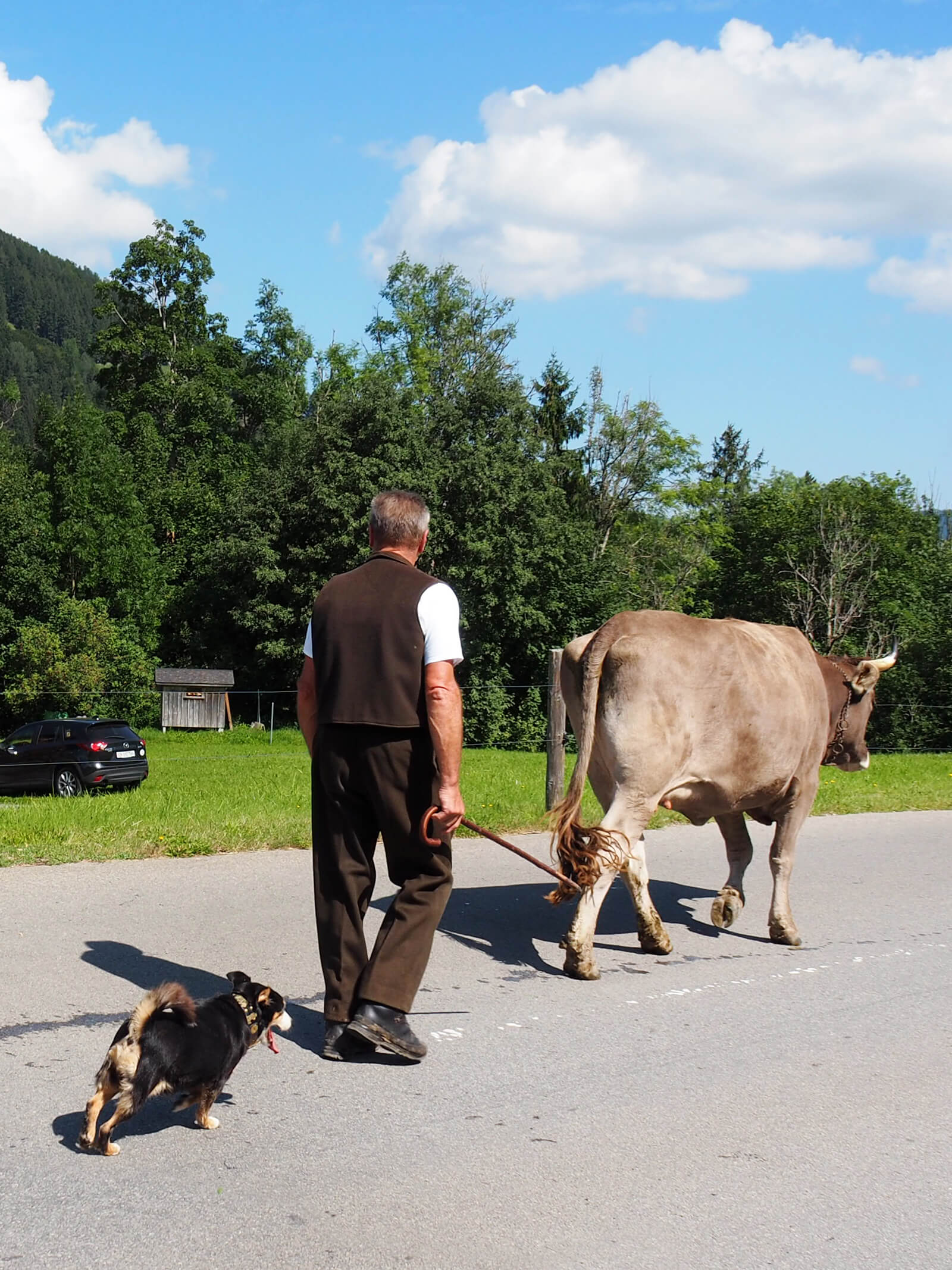 And finally, what they don’t show you on National Geographic: the reason why Appenzell is mostly sparkling clean. Just minutes after the last procession passes, a cleaning vehicle such as this one will get rid of any droppings, a.k.a. alpine pizzas: 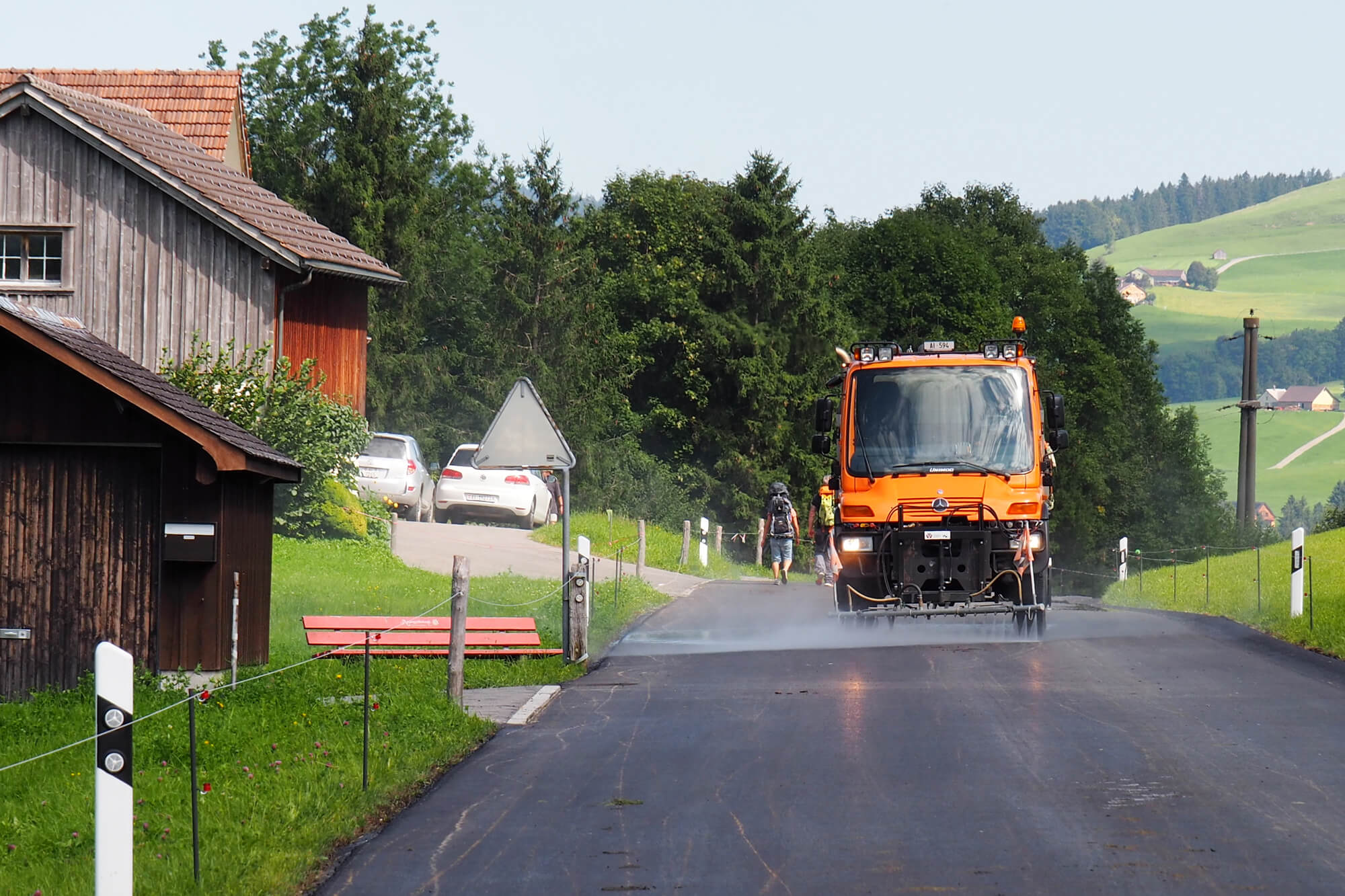 What is the symbolism behind the traditional Appenzell clothing?

The littlest boys will often be walking barefoot, wearing only a pair of brown shorts. The costumes of older boys will match those of adult dairymen.

The difference from adult costumes is that boys would wear a leather cap instead of a hat. And they do not usually have a watch chain, a shirt collar, or a brooch.

The goat girl’s outfit is representative of women’s workwear in Appenzell Innerrhoden: a three-quarter length skirt, a decorative apron with brown or blue stripes, and a white shirt. It is called Trächtli in the local dialect.

The goat girl will often wear her hair in braids. 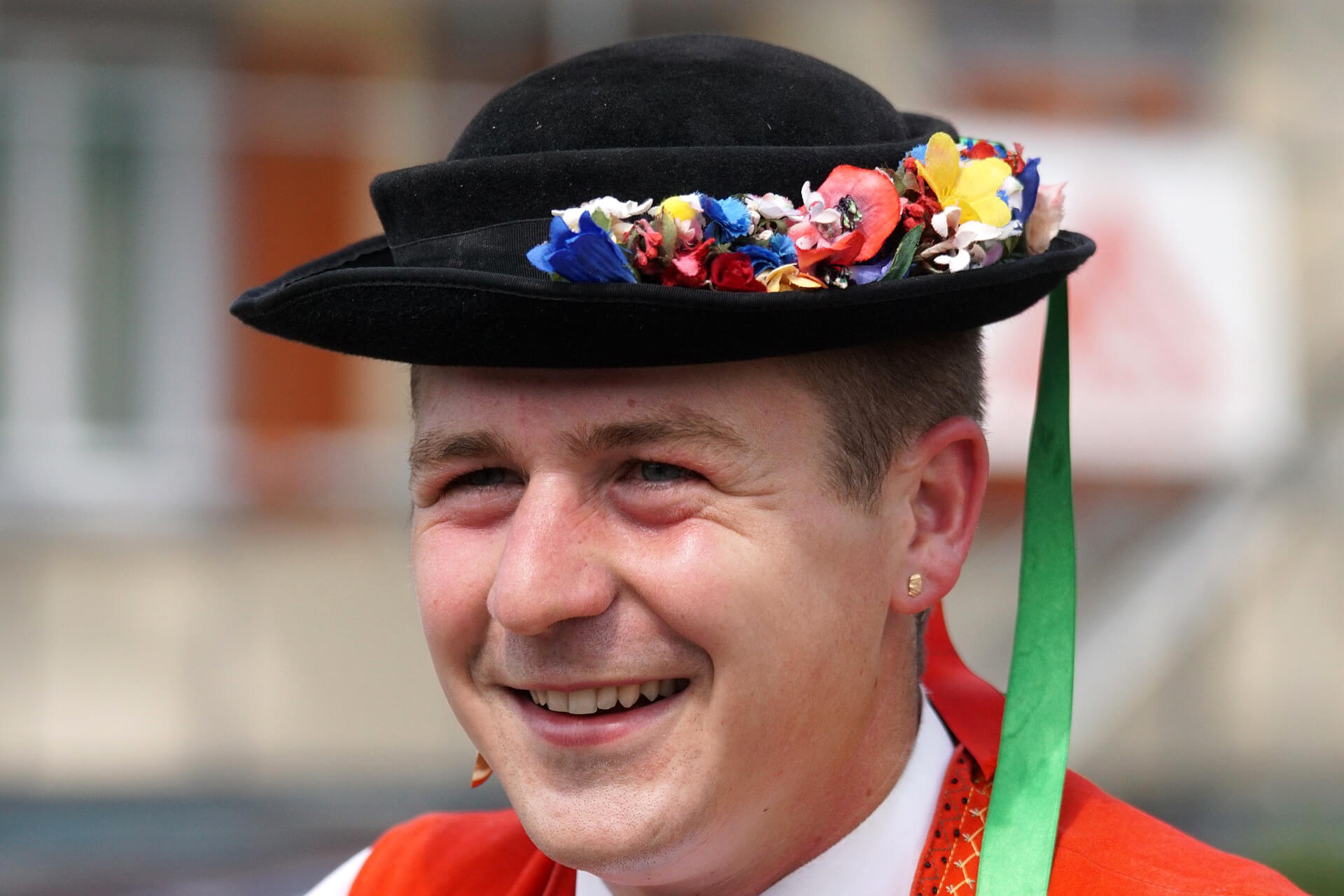 The festive costume of dairymen is somewhat of a visual identity for Appenzell traditions. It was established at the beginning of the 19th century.

The Appenzell dairyman outfit consists of a pair of knee-long pants made of deerskin and handpainted in yellow. There is no fly with a zipper, but instead a square patch with buttons (Latz).

White socks with embroidery, a pair of leather shoes, as well as a black felt hat with a flower bouquet made of fabric are essential, too. On top of a white short-sleeve shirt, a dairyman would wear a red vest with embroidered flowers, the Broschttuäch. He would fold a large napkin featuring depictions of alpine processions into a triangle in order to tie it around the waist (Sennenfetzen). The tip of this fabric belt is supposed to drop onto the left leg. 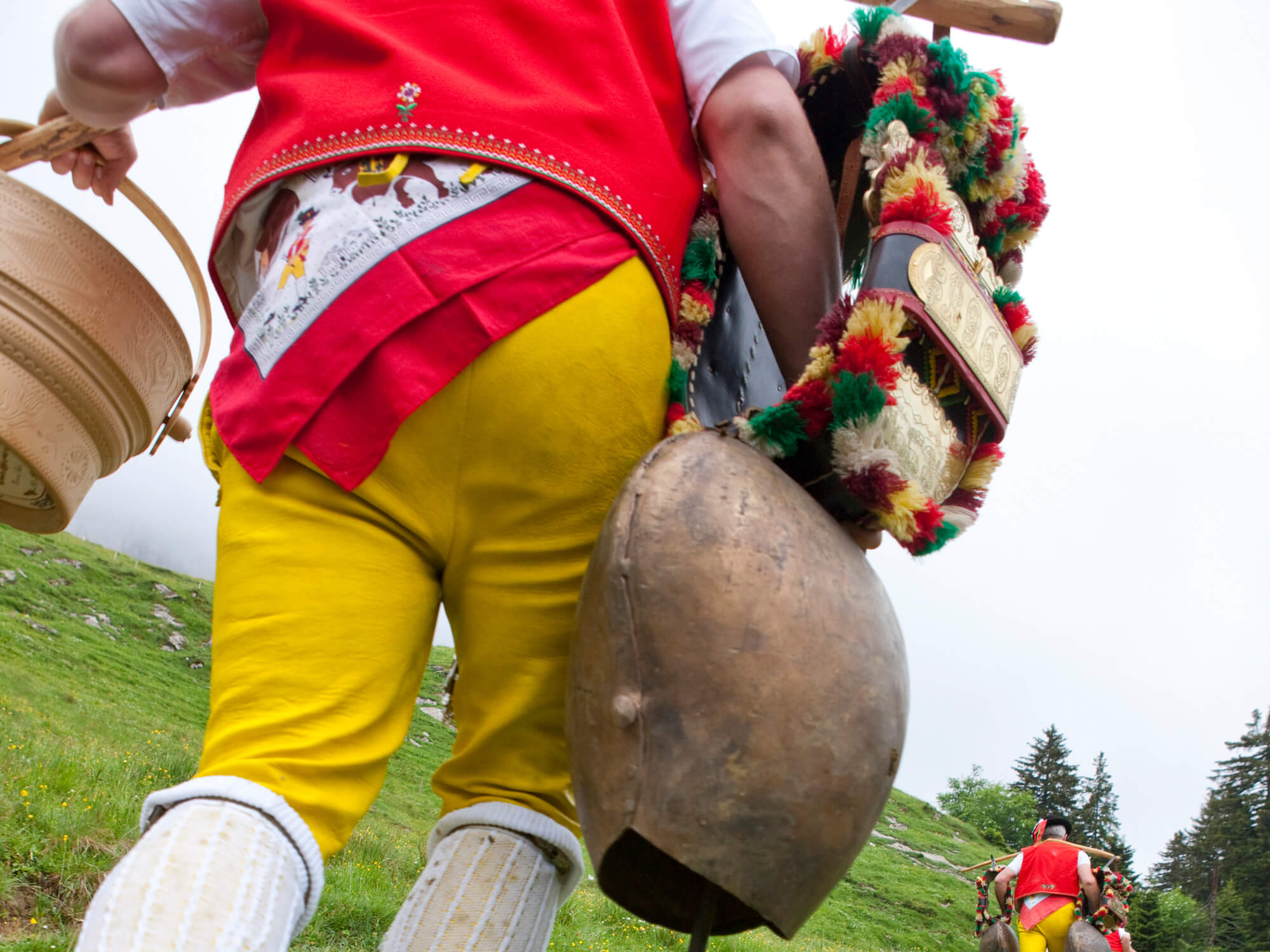 The dairyman costume features beautifully decorated leather suspenders. They connect across the chest with an elaborate leather band and brass element that showcases a procession of cows (Chüelibroscht). A dairyman will proudly wear a gold earring in the shape of a spoon on his right ear (Schueffle), as well as a silver ring on the right hand’s pinky finger. And last but not least, the Bödelisäckli is stuffed with tobacco, to be used with a pipe. 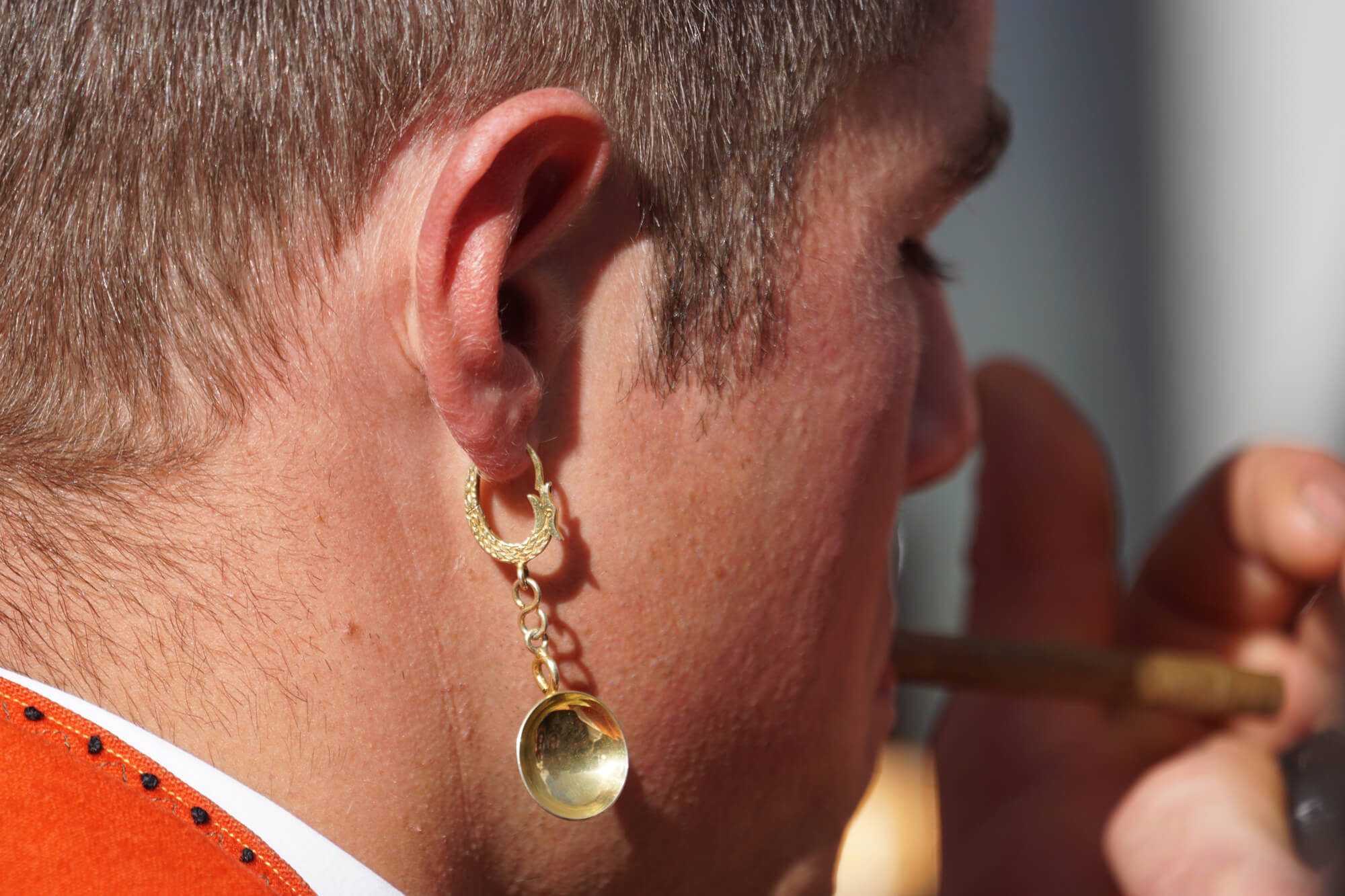 Apart from the color scheme, you can recognize a dairyman by his carrying of a wooden milking bucket around the left shoulder. At the bottom of the Fahreimer, notice how the Bödeli features a beautiful round painting. In small font, the name of the stool’s owner along with the year it was purchased is written down. 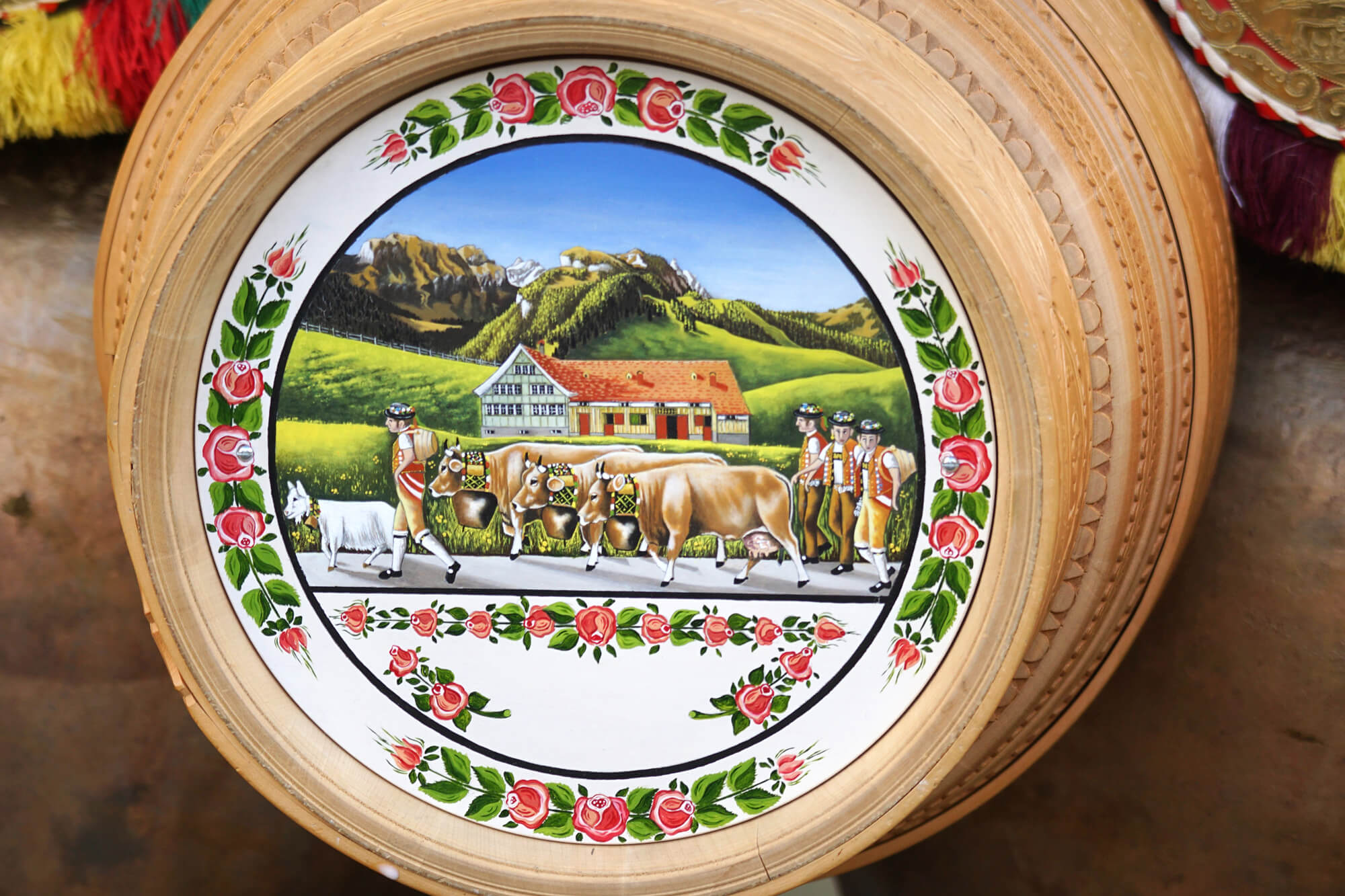 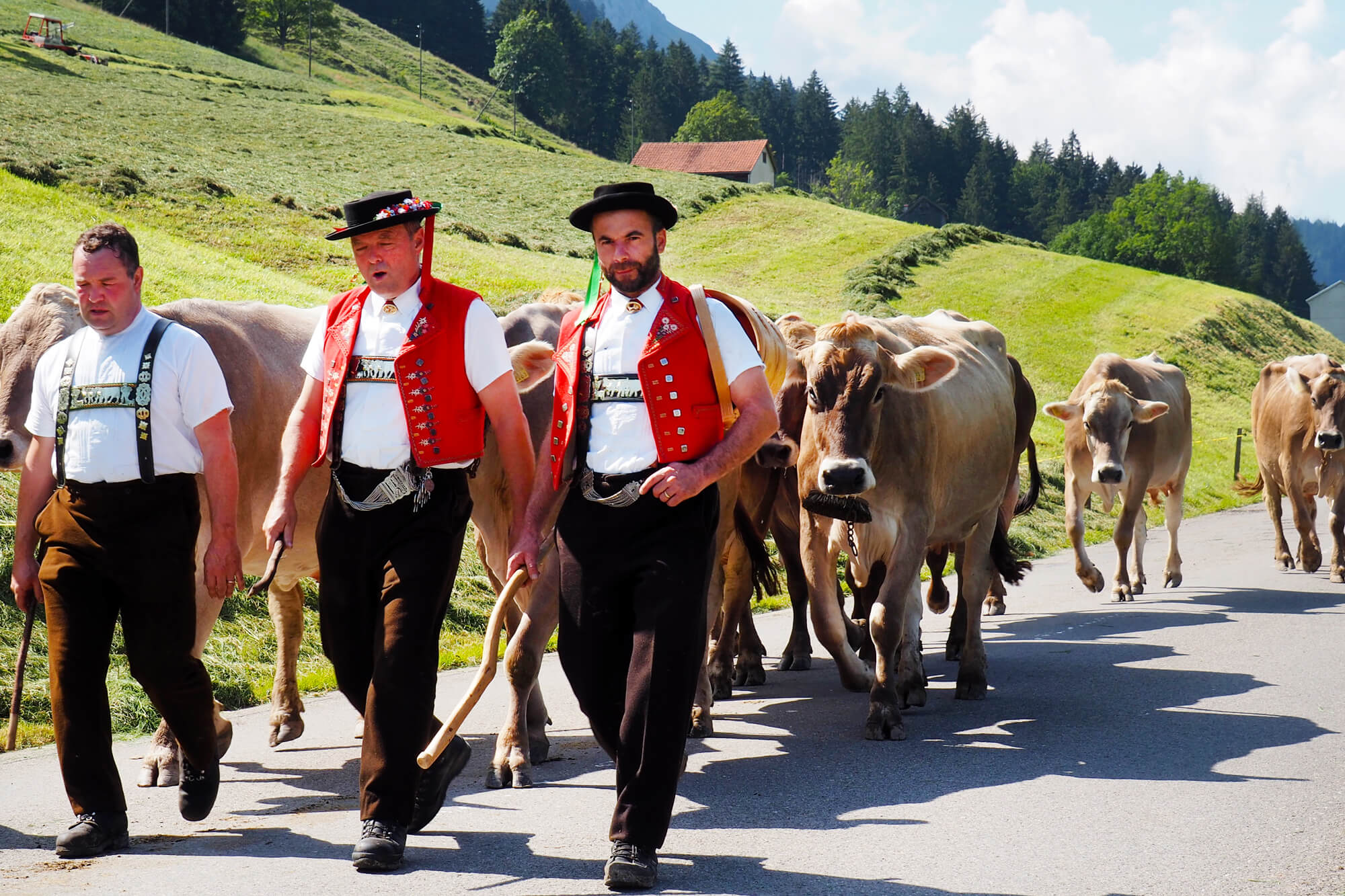 The costume of farmers is very similar to that of a dairyman. A distinct difference is the pair of long brown pants instead of short yellow pants.

The owner at the end of the parade is dressed in his Sunday outfit, the Sonntigshääs. Brown is the color of the pair of pants, the jacket (Joope), and the chest decoration. There is a reason for the simplicity of this traditional outfit: in order to preserve its cultural heritage, it is supposed to animate young farmers to wear it more often.

Is it really legal for livestock to take over entire streets in Switzerland?

This would not be Switzerland if there were no regulations concerning livestock on roads. Due to the increase in road traffic over the years, it has become more common for cars, cows, and humans to share the same road.

Several paragraphs in Swiss law define the legal boundaries, safety precautions, and behaviors of those involved in animal processions. There is even an official memorandum by the Swiss Council for Accident Prevention in Agriculture BUL, incl. a checklist, for the planning of such events!

Here are some of the most important paragraphs from Swiss law:

Nowhere is it stated that the protagonists in the parade are to remain sober. As they walk the entire distance from the alpine meadows to the valley, residents, and restaurants will hand out “fuel” and good wishes. Be it by offering white wine, soda, or water, the tradition of Usehebe shows how significant livestock parades are for local communities.