This ubiquitous Dutch supermarket has delicious salads for as little as 4 euros as well as fresh bread (get it in the morning like the Dutch!) for any budget picnic. I’m in love with the Maza dips, which are vegetarian and 3 euros for two meals worth of dip. For those with a sweet tooth, their stroopwafels are about two euros and addictive.  (Credit cards are not accepted.)

What could be more Dutch? Even for those who hate fish, pickled herring is surprisingly sweet and non-offensive.  If you’re walking around day-time, you might see a stand that sells haring (herring in Dutch).

You can have it raw, pickled, or even whole with onion on a sandwich (or without), but you’ll find it’s ridiculous inexpensive and pretty tasty.

After wandering around the lovely canals or waiting in line for hours at the Anne Frank House, be sure to consider eating a tasty meal in the Jordaan. Prinsengracht is the most well-known canal, however there are smaller canals perfect for sitting by with cheap food in Amsterdam!

Indonesian is something you must try while in Amsterdam.  I’m obsessed with Eethuis Pondok Indah. You might have walked past this small hole-in-the-wall eatery on Prinsengracht without a thought, but I promise it’s the real deal.

Pieter (above) and his wife proudly serve up some of the most affordable and delicious Indonesian in Amsterdam. You can pick what you want from a selection of vegetables and meats although I’ll admit to being obsessed with the tempeh (tofu).

Pittig is the word for spicy and don’t ask for it if you don’t mean it! Open for dinner. Bring cash as they do not accept credit cards, only Dutch debit cards.

I recently visited Simz Exotic Foods in the Jordaan.  This charming little cafe serves Surinamese food.  Many tourists don’t realize that there are many people of Surinamese descent living in the Netherlands due to the Netherland’s role in colonizing Suriname. Although Suriname is located in South America, the mix of cultures has resulted in unique flavors that combine Indonesian, Indian, and African inspired flavors.

Simz has a fantastic lunch special where you can get a delicious vegetarian-friendly tempeh sandwich for around three euros.  I recommend also trying bara, a fried Surinamese bread/donut.  (You can get this with a banana or peppers/sour sauce if you enjoy spicy).  If you’re hungrier, they also have entrees that can be purchased for take-out that will give you a taste of several dishes that you can choose from.

There are a number of small tables inside, however on a nice day, I’d recommend getting your food to go to enjoy on a bench along the canals or at your hotel.  Surinamese food can be spicy, so specify if you want any extra hot sauce.  Be sure to have cash as they do not accept credit cards!

For cheese lovers. Trust me, you don’t need to go to Alkmaar or Gouda to have fresh cheese.  This Dutch cheese shop is open until 7pm most nights, accepts credit cards, and is happy to give samples.

It’s only about ~3 euros for a huge portion of my favorite dairy-free cheese. At lunch, they also serve sandwiches for under 4 euros. Open for lunch and dinner. 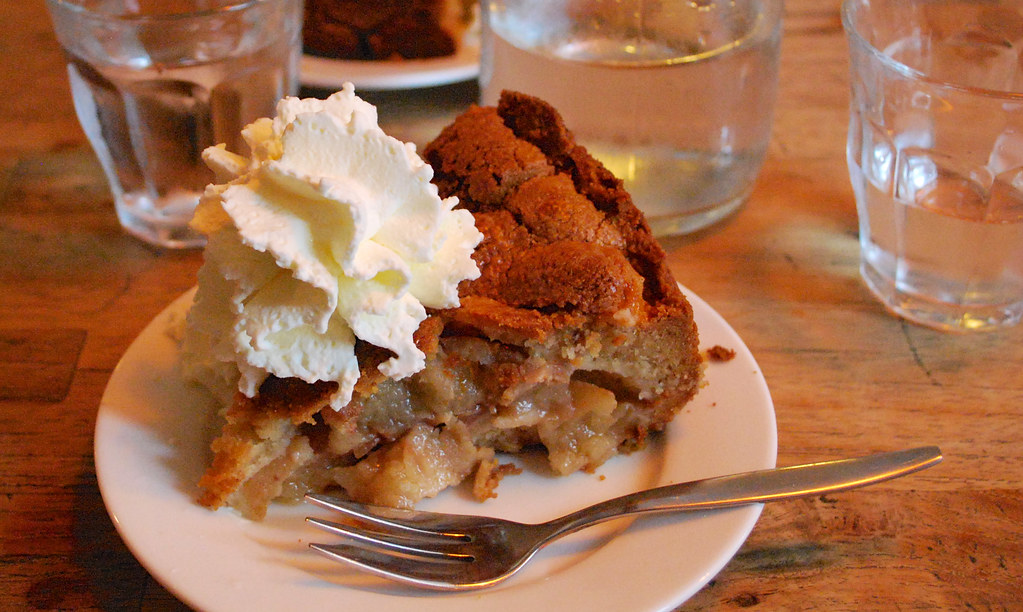 Apple Pie. What could be more American? Just kidding, apple pie with this type of topping is VERY dutch and so good.  Together with a mint tea, you’ll satisfy your sweet tooth for about six euros with a fantastic view of the Jordaan. Perfect for after browsing the Lindenmarkt weekend market.

Although I don’t personally go to Centre often, tourists spent a lot of time in this area and there’s some cheap places to eat in Amsterdam’s center.

If you’re exploring the Bloemenmarkt, this cozy Dutch cafe on a hidden side street off Spui has a reasonable lunch-time menu, including tasty Dutch pancakes and reasonable sandwiches.  There’s a friendly bar cat who likes to rub against customers when he’s not sleeping near the bar. Perfect for a post book browsing lunch.

This is technically high-end, but these are the most famous cookies in Amsterdam. It’s only two-ish euros for one large, rich, and delicious chocolate cookie with a molten chocolate center that is made fresh for every customer. Just be warned that having just one is difficult, but it is not to be missed. (Open until 5:30pm most days.) Close to the 9 Streets.

This cool bakery mostly in Centre has delicious macarons, pastries, and cookies you won’t be able to resist.  At lunch, they also have reasonable sandwiches as well as organic snacks. I have a minor addiction to their homemade chocolate bars.

Under ten euro, you can get delicious Vietnamese Banh Mi Sandwiches.  Need I say more?  There’s a branch in the heart of the center at Zeedijk, a short walk from Centraal Station.  Lunch & Dinner.  Accepts Credit Cards​.

One of the legacies of Amsterdam’s liberal policies in the early 20th century was allowing people to inhabit abandoned buildings as a way of prevent buildings from staying abandoned past a year. However, squatting is now illegal in Amsterdam. ​ A handful of organizations have tried to keep these former squats as the former public spaces they were prior to the law change.

OT301 is a restaurant (on weekends), bar, public space and artist studio. In addition to having awesome graffiti, a cool vibe, it has a non-profit kitchen called de peper on Fridays & Saturdays by volunteers where you can get a soup and a delicious vegan meal for 6 euros (cash only). ​Make a reservation.

This Moroccan restaurant has a delicious chicken sandwich with fries for a ridiculous reasonable price.  I’m totally addicted to the spicy sauce that goes on the chicken and the appetizers. Be sure to have the Moroccan mint tea.  There’s multiple branches around Amsterdam.

I couldn’t leave off Surinamese Roti, a must-try food while in Amsterdam. If you don’t know about Surinamese food, it’s a delicious combination of Indian, Indonesian, African, and Chinese influences. Roti includes roti bread along with veggies and chicken (if you wish). It’s also possible to keep it vegetarian.

Bazar Amsterdam is a beautiful Mediterranean restaurant with a huge menu in a former synagogue. The setting is absolutely fantastic with many decorations and it’s about 10 euros for more food than you could eat in a day.

Deer Mama is a new-ish vegan spot that serves up delicious vegan burgers that are so close to the real thing that you’ll be wondering what’s the difference. Their portions are quite sizable, so for about 12 euros, you can get a hearty vegan burger with fries.

Lovers of Mediterranean food, rejoice.  Sir Hummus has home-made hummus and pita for under 10 euros.  Simple, delicious, and a quick walk from the bustling Albert Cuypmarkt.  There’s now a second location.

Sari Citra is one of those hole-in-the-wall places that you walk by wondering if it’s any good.  Sari Citra is one of the best places to eat authentic Indonesian food in Amsterdam.  I discovered it on my first trip to Amsterdam and numerous friends/strangers have confirmed my suspicions that this take-out eatery is the real deal.

You can get a massive portion of Indonesian food that will last you two meals for under 14 euros.  I love that you can select what you want!  They’re very veggie-friendly. Bring cash as they do not accept credit cards. Dinner only with limited seating.  (Better for take-out.)

For a beautiful and healthy meal, look no further than InStock.  It’s a non-profit restaurant that strives to prevent food waste by using the leftovers from Albert Heijn.

The three course meal is about 20 something euros, but the main course is usually around 10 euros and the portions are ridiculously reasonable.

Very adaptable to dietary needs and typically a vegetarian option. You can feel full and good about yourself afterwards. The main branch is in East and be sure to make a reservation. (Lunch and dinner possible.)

Only a 5-minute walk from Brouwerij ‘T Ij (fantastically inexpensive beer!) is Boi Boi, a Thai restaurant that has a 12 euro dinner special that changes daily.   Tasty and always a surprise!  This is one of my favorite spots for a post-beer dinner.

OTHER FOOD ON A BUDGET

The obsession of many Dutchies.  You’ll see this chocolate brand all over the Netherlands. It is the first slave-free chocolate in the world and their milk caramel-sea salt bar is to die for.

I don’t even like caramel sea salt generally, but I love this chocolate and have it daily.  Really. It’s usually between 1.50 to 2 euros for a small bar. They have seasonal flavors around Easter and I highly recommend it to any chocolate lover.

Drop. Affectionately called “Engels Drop”, these licorice candies are only a euro at the supermarket and drugstores.  Perfect for your licorice loving friends.

If you want the cheapest beer, just ask for a beer. They’ll give you whatever is on tap and only typically ask for the size of the glass. Typically, it’s something like Heineken, Jupiler, or Grolsch, which are all decent beers if you’re not particular about it.

Water: Tap water is almost always free as long as you specify you want tap water, however some less expensive restaurants refuse to do so. Always ask.  Dutch tap water is quite delicious!

Don’t miss the Rolling Kitchens (Rollende Keukens) food festival if you’re visiting while it’s going on in May.  It’s a FREE food festival where you can roam the grounds and try inexpensive food from all the around the world made in food trucks.  My friend Olga (from Dreams in Heels) was lucky enough to experience this for herself!